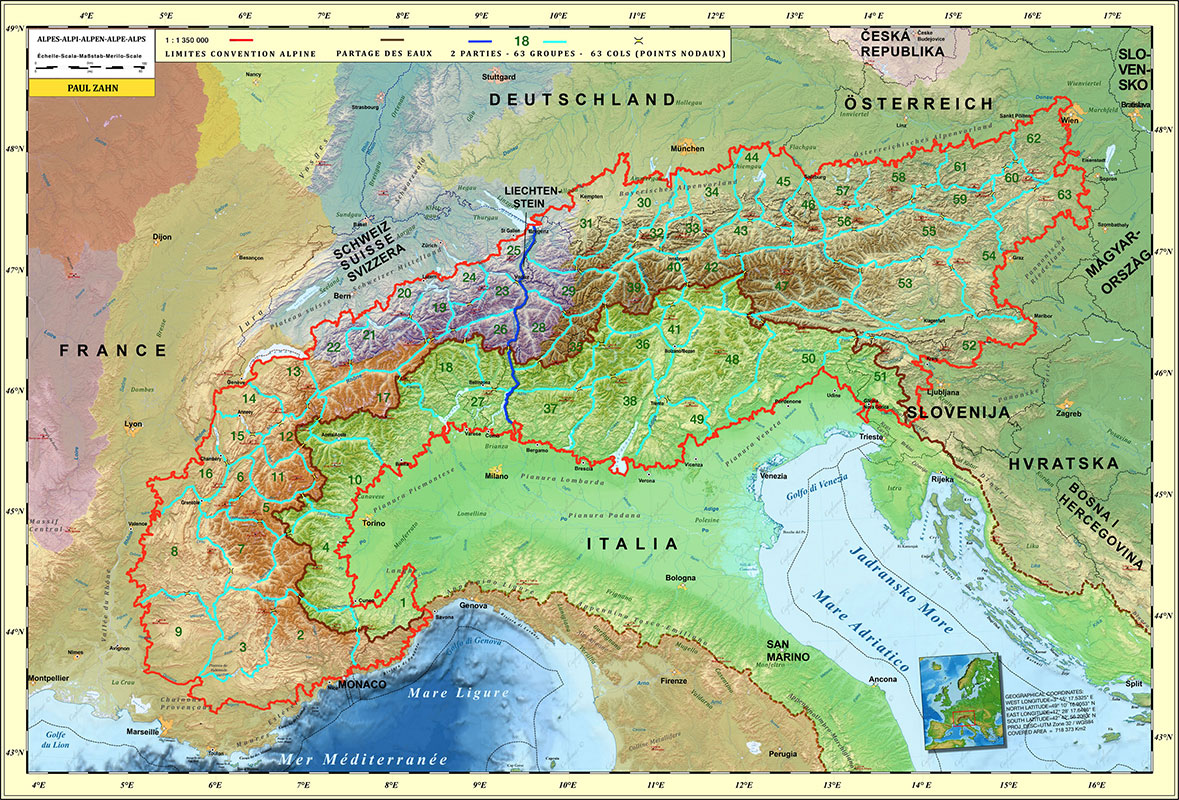 SUBDIVISIONS OF THE ALPINE CHAIN
Area location, classification and designation

The order of things

The birth of European naturalism can be attached to the middle of the seventeenth century under its normative and propositional appearance. Following the eighteenth century saw a real epistemological mutation. In a typical occidental view of nature, there is "The Great Divide" mentioned by anthropologist Philippe Descola (Beyond Nature and Culture), this division between nature and culture, between the scientific and pre-scientific mind, this generalized taxonomy of the world, corresponds to that described Michel Foucault in "The Order of Things" :

« The simultaneously endless and closed, full and tautological world of resem­blance now finds itself dissociated and, as it were, split down the middle: on the one side, we shall find the signs that have become tools of analysis, marks of identity and difference, principles whereby things can be reduced to order, keys for a taxonomy; and, on the other, the empirical and murmuring resemblance of things, that unreacting similitude that lies beneath thought and furnishes the infinite raw material for divisions and distributions. On the one hand, the general theory of signs, divisions, and classifications; on the other, the problem of immediate resemblances, of the spontaneous movement of the imagination, of nature's repetitions. And between the two, the new forms of knowledge that occupy the area opened up by this new split. »

Mountains will not avoid these principles of systematic classification.

Quite as the limits, the internal division interns of the alpine range, whatever is the chosen criterion, is an old problem in the description of the systematization of the Alps and often treated in a very different way according to the diverse authors as well as each alpine nation.
Numerous geographers highlighted the thorny question of the definition of the Alps as well as their limits. We can only be in agreement with the geographer Werner Bätzing who underlines that "there is no single and infallible definition of the Alps ..." and adds "... even the question of internal division is not resolved by consensus." This report is valid for all the mountain ranges.

The purpose of this study is to confront the multiple concepts and the existing nuances by taking place in a historical perspective. In our case, this work of naming corresponds to an objectification of the alpine space. But it is interesting to note that today, a systematic description of the chain, massif by massif, is not an exercise obliged in synthesis dedicated to the Alps as those of Paul Guichonnet, Paul Messerli, Werner Bätzing or Rémy Knafou.

Although a big part of these subdivisions is approached under an orographic angle, some consider other criteria such as administrative boundaries, geological, biogeographical, ecologic or characterized by natural areas including climate, vegetation, hydrography, geomorphology with anthropogeographical characteristics.
Regarding orography, currently, there are no standards for classifying massifs of the Alpine system. If we try to create a standardization, one can certainly find many common elements in the various subdivisions in this topic, but the quote of the geographer-cartographer Eduard Imhof, giving its opinion on the boundaries between the Swiss Pre-Alps and the Mittelland: "Every subdivision orographic while obtaining the approval of certain geographers, is normally contested by others" perfectly illustrates the difficulty of finding a consensus.

Remarks about the orographic divisions

In general the main subdivisions differ in three ways:

1. First, examination of pure orographic limits and secondly, orographic and mixed geological boundaries.
2. The use of a defined process of a specific method, especially Strzygowski, Mang, NRS and Mattmüller or without method.
3. The principle of two or three main sections (Western and Eastern Alps or, Western, central and eastern Alps) in the case of confused subdivisions.

The mountain systems are orographic objects characteristic of the planet's surface.
Geologically speaking, a mountain range is the upper part of an orogen(*) or of an uplifted and folded region of the earth's crust.
But if that upper part eventually is eroded, so the surface of this orogen became a plain, the orogen nevertheless exists

The continents are composed of orogens, at least one, therefore the continent and the orogen are more or less the same, even if there are no mountains at all, and even if the continent is under the sea! We can therefore see that an orogen has no strong relationship with a mountain range.

In the specific case of an orographic subdivision, the inclusion of geological aspects in a mountain range subdivision is clearly wrong. Serious geologists would not do it because they know that the geological limits, of neither lithological nor tectonical nature, are not always identical with the boundary between two mountains.

Let us say that the subdivision of a mountain range is a problem of separation between two mountains.

Since ancient times and especially during the period of the Roman Empire, the Alps are divided into provinces, but it is really in the XVIth century which Josias Simler, a pioneer on the subject, tries to establish a coherent set of the territory. However, these questions began to be studied from the middle of XVIIIth century and more in detail in the XIXth century with the arrival in the mountains, in a period of évolution of scientific knowledge, scientists travelers. Later, with the tourism and topos guides (individualization of the massifs) the work of nomenclature occupies a massive foreground.
During this period, the massifs are grouped under criteria defined by a literature that considers the former Roman provinces. Similarly, the names of the vernacular massifs are not necessarily connected to the highest summit.

From a general point of view, we appeal to the concept based on 2 big geographical spaces, the western Alps and the oriental Alps, of geologic inspiration, and more frequently used by the German and Austrian authors.
Another proposal consists in subdividing the Alps into 3 parts: the western Alps, the central Alps and the oriental Alps. Often the central Alps amount in the Swiss Alps.

These proposals are not always well-defined method.

VARIOUS DIVISIONS OF ALPS FROM ANTIQUITY TO THE PRESENT :

Special thanks to Dr. Roderich Mattmüller for his advice, support, documentation and confidence.

Orogeny : Greek oros, ‘mountain’ + -⁠gen, ‘creation’ , ‘fact of’ - the forces, events, etc., that cause severe structural deformation of the Earth’s crust, especially from movement of the tectonic plates — Orogeny is the primary way that mountains are formed. This term does not apply to any relief: volcanic reliefs, intracratonic chains are not orogens.
(ex. alpine orogen)